Food (also known as points, bits, or pellets) are the pellets that powerlines must collect to increase in length.

Food is dropped by powerline's (players) when they die. Any powerline can collect the food dropped by another powerline, even if it was not the player who killed them. As food is collected, players boost. Each pellet is worth 10 points (a score of 10). The more food players collect, the longer they grow and the higher their score becomes. The player with the most food collected (highest score) is king until they are killed, and they drop all their food for others to collect.

Food resembles small square pellets whose color depends on the powerline. They came from (the powerline that dropped the food after they died). Food floats, hovering in the same location it was dropped. Food despawns after 30 seconds of being uncollected. 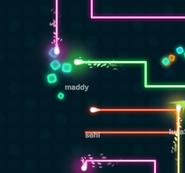 Two players racing to collect food.
Add a photo to this gallery

Retrieved from "https://powerline-io.fandom.com/wiki/Food?oldid=678"
Community content is available under CC-BY-SA unless otherwise noted.